Brickipedia
Register
Don't have an account?
Sign In
Advertisement
in: Class 4 articles, Sets listed for ages 8+, BIONICLE,
and 2 more

8566 Onua Nuva is a LEGO BIONICLE set released in 2002. He is one of the six Toa Nuva. He is armed with 2 rock cutting quake breakers that can be attached to his feet to become all-terrain treads. He wears the Pakari Nuva, the Nuva Mask of Strength. He has armor on his body and shoulder plates covering his shoulders. In the BIONICLE Universe, he was a Toa Nuva of Earth and had remained silent when the Toa Nuva split up before the Bohrok-Kal were released on Mata Nui. Onua is the strongest Toa Nuva and has a realm similar to Pohatu's. The set is Onua's second appearance in set form.

Mata Nui will need the wisdom and strength of Onua Nuva more than ever in the months to come. Now no place on the island is too far or too dangerous for him to reach, for his quake breakers can be used as high-speed, all-terrain tracks. They can also be used to carve new passages in the earth. Onua Nuva wears the Pakari Nuva, which increases his raw strength to amazing levels. 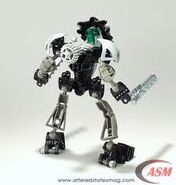 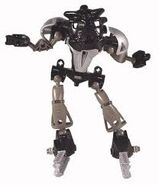 £4.99 +
Released
2002 +
ShopDescription
The Power Lies Beneath! When the To … The Power Lies Beneath!</br></br>When the Toa are exposed to the strange energies of Protodermis, they are transformed into the mighty Toa Nuva! With new powers, new armor, and new tools, the Toa Nuva are fully prepared for any threat to their island home. But will the power of the Toa Nuva save Mata Nui… or shatter it forever?</br></br>Wielding the power of the earth!</br>Onua Nuva lives in the rocky tunnels deep beneath the surface of Mata Nui. His quake breakers make carving new passageways in the stone child’s play, and when they are attached to his feet, they turn into high-speed, all-terrain tracks that get him wherever he needs to go! Turn the wheel on his back to move his mighty arms.wheel on his back to move his mighty arms. +
Theme
BIONICLE +
Title
Onua Nuva +
Type
Set +
USPrice
$7.99 +
Advertisement