8592 Turahk is a BIONICLE set released in 2003. It is one of the seven Rahkshi types that have a set. Turahk are the Masters of Fear. Using their staffs, Turahk can induce anything from slight unease to sheer terror in their foes. A being who has been struck by a blast will either run away in panic or remain rooted to the spot in sheer terror. The Turahk's power is particularly disturbing to the Toa Nuva, heroes that have rarely known fear. A Turahk is also the one responsible for killing Jaller, before the latter was revived by Takutanuva. The set includes, besides the Turahk itself, a Staff of Fear and a Kraata. If it was bought at Wal-Mart during a limited time offer, instead of coming with its red Kraata, it would come with a shadow Kraata. 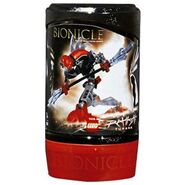 £5.99 +
Released
2003 +
ShopDescription
Fear the Turahk! From the exciting … Fear the Turahk!</br></br>From the exciting new direct-to-video movie BIONICLE: Mask of Light, here come the Toa Nuva’s greatest foes: the Rahkshi. These “sons of Makuta” have been unleashed on the island to find the Mask of Light and stop the coming of the Seventh Toa!</br></br>Never before have the Toa Nuva faced such a terrifying foe! Turahk’s staff can create fear in an opponent, paralyzing him with terror or making him run away. Even the heroes of Mata Nui cannot resist the fear Turahk brings! Nui cannot resist the fear Turahk brings! +
Theme
BIONICLE +
Title
Turahk +
Type
Set +
USPrice
$8.99 +
Advertisement