Brickipedia
Register
Don't have an account?
Sign In
Advertisement
in: Class 4 articles, Sets listed for ages 9+, BIONICLE,
and 2 more
English

8593 Makuta is a BIONICLE set released in 2003. It contains a BIONICLE model of the character Makuta Teridax. It was the first set of a Makuta to be released. 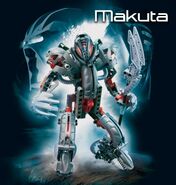 Makuta in the Mask of Light movie.

£14.99 +
Released
2003 +
ShopDescription
The master of shadows! Makuta is th … The master of shadows!</br></br>Makuta is the powerful enemy of the Toa Nuva, who schemes to keep Mata Nui asleep forever. Using his power of darkness, he turns friends into enemies and tries to rob the Matoran of their three values: unity, duty and destiny. Use the gear on his back to make Makuta turn from side to side. Includes the all-new Kanohi Kraahkan, the Mask of Shadows. Combine with #8596 Takanuva to build the mighty Takutanuva!6 Takanuva to build the mighty Takutanuva! +
Theme
BIONICLE +
Title
Makuta +
Type
Set +
USPrice
$19.99 +
Advertisement