Brickipedia
Register
Don't have an account?
Sign In
Advertisement
in: Class 4 articles, Sets listed for ages 8+, BIONICLE,
and 2 more

Takua believed he was a Ta-Matoran, but never really seemed to fit in. In reality, he was an Av-Matoran in disguise. One day he found the Mask of Light and he and his friend Jaller embarked on a quest to find the legendary Seventh Toa. Pewku serves as a mount and companion during the quest. What is later found out is that Takua was destined to become the 7th Toa, Takanuva, after he had put on the mask of light.

Pewku was Takua's loyal Ussal Crab pet. She has been the favourite pet of several Matoran. Owned by Takua, she helped Takua and Jaller avoid the Rahkshi and find the seventh Toa. 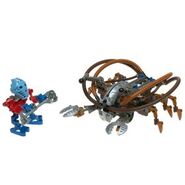 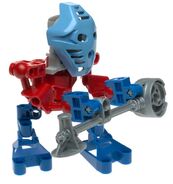 £14.99 +
Released
2003 +
ShopDescription
Help Takua find the Seventh Toa! Ta … Help Takua find the Seventh Toa!</br></br>Takua the Chronicler is on his most dangerous quest. With his best friend Jaller, he is searching the island of Mata Nui for the mysterious Toa of Light. His trusted Ussal crab, Pewku, helps him stay one step ahead of Makuta and the Rahkshi. Move Pewku backward and forward on a flat surface and his crab legs look like they are really crawling. Combine this model with #8593 and #8594 to build Makuta Nui! with #8593 and #8594 to build Makuta Nui! +
Theme
BIONICLE +
Title
Takua and Pewku +
Type
Set +
USPrice
$19.99 +
Advertisement