Brickipedia
Register
Don't have an account?
Sign In
Advertisement
in: Class 4 articles, Sets listed for ages 9+, BIONICLE,
and 2 more

8596 Takanuva is a BIONICLE Titans set released in 2003, containing the character Takanuva, the Toa of Light, and his Ussanui, a vehicle that helped him travel to Mangaia, the lair of Makuta. It has 197 pieces.

Storywise, this was the first set to contain the famed Toa of Light, Toa Takanuva. This set is one of the three sets to ever feature Takanuva.

The Kraata holders are both set-wise and storywise correctly six, each for every Rahkshi. It also features some Bohrok-Kal shields. In the storyline, the Ussanui is made of the defeated Rahkshi and Bohrok-Kal.

This set was based of the character Takua or Toa Takanuva from the 2003 movie, BIONICLE: Mask of Light. In the movie, the Matoran Takua and Jaller are tasked with finding the Toa of Light using the Mask of Light. After donning the mask himself, Takua transforms into the Toa of Light at the end of the movie, and sets out on his Ussanui to find and defeat Makuta, therefore completing the Turaga's prophecy.

Takanuva was the Toa of Light. Originally a Matoran, he was friends with Jaller and would often go exploring with him. On one adventure, he found a mask (the Kanohi Avohkii), bringing it back to the town. However, upon being questioned by the Turaga, he was scared and secretly passed the mask to Jaller. The mask was revealed to be a prophecized mask, with the prophets incorrectly believing that Jaller was the chosen one due to him having the mask. They then sent Jaller and Takanuva (then Takua) on a quest. At the end of the quest, Jaller sacrificed himself to save Takua, giving Takua the mask, who then proceeded to become Takanuva and defeated Makuta's Rakhshi. He then proceeded to Makuta's cavern, where he had a contest of Kohlii with Makuta and won, defeating Makuta and merging with him to become more powerful. The Matoran, who had been gathered in the cavern, were now trapped inside and Takanuva was seemingly crushed while trying to hold the door open for all of the Matoran to escape (he also revived Jaller). Later he was revived by the Mask of Light, which also revived Mata Nui. He could fire beams of light, banish darkness, create blinding flares and create holographic projections. He was briefly the Toa of Twilight after being attacked by a shadow leech and having his powers greatly weakened due the exposure. He was later cured of this by the healing sonic blast of a Klakk, however.

Ancient Matoran legends speak of a mysterious Seventh Toa, who will free the island of Mata Nui from darkness. The signs of his coming are said to be the discovery of the Mask of Light and the appearance of a seventh star in the sky. Now both those events have taken place, and Takanuva walks the surface of Mata Nui at last!

The Toa of Light wears the Kanohi Avohkii, which can project powerful beams of light energy and banish the shadows. The Avohkii brings understanding, turning anger to peace and enemies into allies. His destiny is to challenge Makuta, master of shadows, and lead the Matoran out of the darkness and into the light.

Takanuva carries the Kolhii Staff of Light, and rides the Ussanui, a sleek vehicle made from parts of Rahkshi and Bohrok-Kal. The Ussanui is powered by Kraata and can find its way to Makuta wherever he may be. 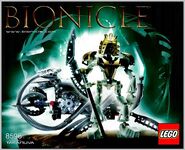 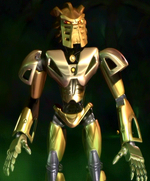 Takanuva in Bionicle: Mask of Light

Takanuva on the cover of Bionicle: the Game

Takanuva in Bionicle: the Game

£19.99 +
Released
2003 +
ShopDescription
The Toa of Light will save Mata Nui! … The Toa of Light will save Mata Nui!</br></br>Legends tell of a mysterious and powerful Seventh Toa who will save the island from Makuta… and now he has arrived! Wearing the Kanohi Avohkii, the Mask of Light, and carrying the Kolhii Staff of Light, he will challenge the darkness of Makuta to free the Matoran. His vehicle, the Ussanui, can speed through the ancient tunnels beneath the island to reach Makuta's lair. The final challenge is about the begin! Push the lever down on Ussanui to make the landing gear come down. Fit the Kraata into the Ussanui to help it track down Makuta! Combine this model with #8593 Makuta to build the powerful Takutanuva!3 Makuta to build the powerful Takutanuva! +
Theme
BIONICLE +
Title
Takanuva +
Type
Set +
USPrice
$29.99 +
Advertisement