8601 Toa Vakama was a 49 piece BIONICLE set released in 2004. His arms can be moved by turning a gear on his back. Vakama comes with a Kanoka Disk Launcher and a Toa-Disk. 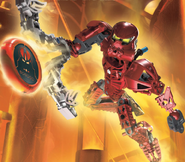 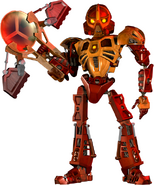 Movie Version
Add a photo to this gallery

£5.99 +
Released
2004 +
ShopDescription
'Fiery leader of the Toa of Metru Nui! … Fiery leader of the Toa of Metru Nui!</br></br>Toa Metru of Fire and guardian of Ta-Metru, Vakama uses his disk launcher and Great Mask of Concealment to defeat threats to Metru Nui. His strange visions of the future lead the Toa on dangerous quests into the darkest parts of the city of legends. Includes disk launcher and Kanoka disk.</br></br>Look inside for a special Kanoka card with a BIONICLE® Instant Win game! Plus enter the card's Kanoka code on BIONICLE.com to access secret BIONICLE information.com to access secret BIONICLE information. +
Theme
BIONICLE +
Title
Vakama +
Type
Set +
USPrice
$7.99 +