8602 Toa Nokama is a BIONICLE set released in 2004. She is one of the Toa Metru. As weapons, she has two Hydro Blades. Nokama wears the Rau, the Great Mask of Translation. She is blue in colour. In the BIONICLE universe, Nokama was a Toa of Water, who Vakama considers to be his only friend among the Toa Metru. 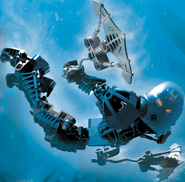 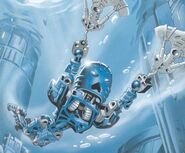 Concept Art
Add a photo to this gallery

£5.99 +
Released
2004 +
ShopDescription
'Ruler of Metru Nui's protodermis sea! … Ruler of Metru Nui's protodermis sea!</br></br>Toa Metru of water and guardian of Ga-metru, Toa Nokama can often be found using her twin hydro blades to speed through the protodermis canals. Intelligent and strong, she has the wits to solve mysteries and the power to defeat any foe.</br></br>Look inside for a special Kanoka card with a BIONICLE® Instant Win game! Plus enter the card's Kanoka code on BIONICLE.com to access secret BIONICLE information.com to access secret BIONICLE information. +
Theme
BIONICLE +
Title
Toa Nokama +
Type
Set +
USPrice
$7.99 +