Ahkmou was a carver in the city of Metru Nui and acquainted with fellow Matoran Nuhrii, Ehrye, Orkahm, Vhisola, and Tehutti. Through unknown circumstances he discovered the location of the Po-Metru Great Kanoka disk and ended up in the employ of Nidhiki and Krekka, the Dark Hunters, who sought to claim all six disks for Makuta. As such, they involved Ahkmou in their schemes, using various methods to lure the other five Matoran into danger in the hopes of obtaining the Great Disks they had discovered. Ahkmou then attempted to create the illusion that he was just as much a victim as the others, but his old acquaintance and now Toa Onewa saw through his deceptions, and the Toa Metru soon determined that Ahkmou was pursuing his own agenda. Ahkmou was thus forced to aid the Toa in recovering the Great Disks and later formed a Matoran Nui with his five comrades; however, after the fusion broke apart Ahkmou refused to have anything more to do with them and went off on his own.

Ahkmou was later placed into a deep sleep and sealed within a capsule designed to erase his memories so that, when he awoke, he would regard Makuta as his ruler instead of Mata Nui. His capsule was one of six initially recovered by the Toa Metru only to be lost on their journey to the island of Mata Nui; he was later awoken by Makuta and convinced that his "benefactor" was a noble being. He later joined the other Matoran on Mata Nui and served Makuta in secret, later spreading a plague by selling balls that had been exposed to an Infected Kanohi Mask. Ahkmou later traveled back to Metru Nui with the other Matoran, and after Makuta's rise to power was named a "Turaga" and placed in charge of the city. 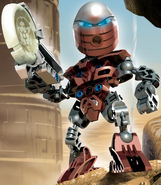 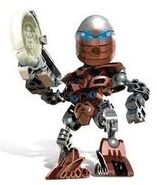 £2.99 +
Released
2004 +
ShopDescription
Master carver of Po-Metru! In the t … Master carver of Po-Metru!</br></br>In the time before time, Metru Nui, city of legends, faces danger unlike any it has known before. A mysterious and powerful menace threatens the city, striking from the shadows and then disappearing, leaving rubble in its wake. Six Matoran hold the keys to its defeat, but they have disappeared! Worse, one of them has been touched by darkness and plots against all of Metru Nui. Ahkmou loves to compete, but always seems to come in second best. Now he plots to change all that—and Metru Nui may never be the same! Includes disk launching action and collectible Kanoka disk.nching action and collectible Kanoka disk. +
Theme
BIONICLE +
Title
Ahkmou +
Type
Set +
USPrice
$3.99 +