8621 Turaga Dume and Nivawk is a BIONICLE set released in 2004. It contains Dume as a Turaga and a Nivawk Rahi.

Turaga Dume has a red body, red limbs, and red arms, which they joined together with blue pieces. His feet, hands, and the top of his limbs and arms are joined with black connectors. His head is also connected with a blue piece. His head is black, like his neck, and has an orange-coloured brain. He wears a red and black Noble Kanohi Kiril, Mask of Regeneration.

Nivawk has a grey head with red eyes, a large grey beak that has three prongs at the front, and black TECHNIC pieces that connect his head to his body. Thin, long grey and black beams connect Nivawk's body and wings. The wings consist of four grey swords, two on each side, that are connected to the limbs by more grey BIONICLE parts. Nivawk's body is also mostly grey, and contains a contraption that allows Turaga Dume to be carried by Nivawk. Nivawk also has two large feet, each containing three large, grey talons. Two of each foot's three talons are at the front of the foot, and one of each is at the back.

Very little is known of Dume's life as a Matoran. However, it is known that he was transformed into a Toa and became the leader of his Toa team.

Dume was a Toa for thousands of years, during which he primarily fought against Rahi and the Dark Hunters. 17,000 years before the Toa Inika reached Voya Nui, he saved the life of a Ta-Matoran Crafter named Lhikan, and later had a hand in his transformation into a Toa. The time within the next two thousand years, Dume became a Turaga and was then appointed the Turaga of Metru Nui.

Four thousand years ago, Dume's rule was threatened by Dark Hunters. Three of their number, Avak, Reidak, and Vezok, released the Kanohi Dragon from its icy prison underneath Metru Nui. The beast wreaked havoc on the city for several hours, causing massive damage to the city, as well as incapacitating hundreds of Vahki units. After several hours of the rampage, Dume grew desperate, and sent a dozen Vahki to request assistance. The Turaga was cornered in his chambers by the three Hunters that released the Dragon, offering their "protection." Dume refused them immediately, demanding that they exit his chambers. The Hunters threatened him, but stopped short of carrying out any such method of punishment by the arrival of a group of eleven Toa. The Toa convinced the Hunters to leave, and then defeated the Kanohi Dragon over the course of the next month. After a long debate, the Toa eventually transported the Rahi to Xia, promising Dume that they would return.

When a murdered Ta-Matoran was found in Metru Nui, Dume instructed Jaller to investigate it. It was later discovered that a Toa of Water, Tuyet, was responsible for several murders of Matoran. After being defeated by Lhikan and Nidhiki, she was locked in the Coliseum as Lhikan and Dume decided upon a means of punishment, but she mysteriously disappeared overnight, teleported by Botar to a pocket dimension.

Over the course of the next thousand years,Toa Dume dutifully defended his city against the invading forces of Dark Hunters. At some point, Thok tried to kidnap him, but the attempt failed, and an enraged Shadowed One declared war. As the fighting broke out, Dume was forced to hole up in the Coliseum, for fear of his life. It had seemed like a lost cause until Toa Naho managed to slip through the Dark Hunter ranks and retrieve help. Reinforcements of nearly a hundred arrived, and the war escalated. Dume, however, was still forced to remain in the Coliseum, surrounded by a guard team at all times.

At some point, more reinforcements were requested, to be delivered discreetly on what were supposed to be supply boats. Lhikan sent one of the guard team, Nidhiki, to fetch them, without telling him what they actually were. Lhikan himself slipped out, and tracked Nidhiki to his meeting with the Hunters. The next day, Lhikan's forces ambushed the Dark Hunters, revealed Nidhiki's betrayal, and banished him from the island along with the Hunters, effectively ending the war.

1,001 years before the Toa Inika reached Voya Nui, Dume was taken prisoner by Makuta Teridax and placed into a Matoran Sphere to stop him from interfering. Teridax masqueraded as Dume for the next eighteen months hiring three Dark Hunters to eliminate what was left of the Toa Mangai, as well as furthering his plan to put the Great Spirit Mata Nui to sleep. The Toa Metru discovered Dume, sleeping in his pod, after reuniting below Po-Metru. However, the Toa Metru were ambushed by Lohrak, and were forced to abandon him in his pod.

Due to a malfunction in his Matoran Sphere, Dume awoke of his own accord sometime during the events of the Great Rescue, without suffering from any side effects from the pod.

After the defeat of Sidorak and the Visorak hordes, he chose to stay on Metru Nui rather than join the Matoran on Mata Nui, and begin rebuilding the city, using his Kanohi Kiril. Approximately 500 years after the Matoran had left, Dume helped the Rahaga and Keetongu fend off a rogue Visorak troupe from Metru Nui.

When the Matoran returned to Metru Nui, Dume and Nuju began paying close attention to the stars, eventually coming to the horrifying conclusion that Mata Nui was slowly perishing. While the Matoran were rebuilding the city, Dume called a conference of the Toa Nuva and Turaga, revealing his discovery. He spoke of the legendary Mask of Life, a powerful artifact that could save the Great Spirit's life.

Shortly after revealing this news, Dume led the Turaga and the Toa Nuva to a spherical room underneath Onu-Metru where six Toa Canisters were floating. He then witnessed the departure of the Toa Nuva for the island of Voya Nui.

After Jaller became angry with the Turaga due to their refusal to tell the Matoran where the Toa Nuva had gone and Nokama later informed the Ta-Matoran of what had happened, Dume grew furious, going so far as to say Nokama betrayed them by revealing to Jaller what the Turaga had learned. He also refused to send Takanuva after the Toa Nuva, claiming that it was his destiny to defend the city. Takanuva directly disobeyed his orders, and journeyed with Jaller and his crew of Matoran, though he later returned. Dume promised Takanuva to consider sending him after the Toa Nuva and Jaller and his team, the latter having already returned to defend the city.

When the Toa Nuva finally returned from Karda Nui, Dume gave a victory speech to the Matoran from the Coliseum.

However, halfway through the speech, he was cut off by Makuta Teridax, who informed the gathering that he had taken over Mata Nui's body and thus claimed dominance over the entire Matoran Universe. Dume fled with the other residents of Metru Nui into the Archives, where they hid from Rahkshi and, with the rest of the Turaga, he found Krahka, who led the Toa Nuva through underground tunnels to the shoreline. Some time later, he, along with the other Turaga of Metru Nui, was imprisoned in the Coliseum, with Ahkmou taking their place as the new "Turaga".

In an alternate universe, Turaga Dume and the other Turaga of Metru Nui organized a mass migration to the island of Mata Nui following the Great Spirit's death. Once a stable society was formed, Dume became a member of the ruling council of the Kingdom of the Great Spirit, with its leader being Turaga Takanuva.

In an alternate universe, Dume attempted to stand up to Tuyet, who had defeated Lhikan with Nidhiki's help, and as a result he was placed in stasis inside the Archives. He was eventually freed by Takanuva, but he, the Toa, and Takua were captured by the Makuta living in the Archives. He remained in the custody of the Makuta as Takanuva ventured out to acquire the Kanohi Vahi, and later joined them in the battle against the Toa Empire and rallied Lesovikk's unit.

Nivawk was an extremely powerful Rahi, strong enough to carry a Matoran-sized being without any strain. Its species typically feed on smaller flying Rahi, swooping out of the sky and removing them from their nests. For offense and defense, Nivawk relied on its sharp beak and claws.

The Nivawk are hawk Rahi that are mostly alive. After Makuta Teridax assumed the disguise of Turaga Dume 18 months prior to the Great Cataclysm, he used Turaga Dume's Nivawk to spy on enemies for him, as he had the ability to understand the Rahi's language. It occasionally transported Teridax from place to place.

Nivawk went to the Great Temple and spied on the conversations of the gathered Matoran Vakama, Nokama, Matau, Onewa, Whenua and Nuju. It watched the Matoran's transformation into Toa Metru, and passed the information on to Teridax. Nivawk observed and reported on the skirmish between the Dark Hunters Nidhiki and Krekka and Toa Vakama, Nokama and Matau in an Airship above the skies of Metru Nui. Later, Nivawk witnessed the same three Toa defeating the Vahki Zadakh guarding the Po-Metru entrance to the Prison of the Drk Hunters and again promptly informed Teridax about their doings.

During the Great Cataclysm, Teridax absorbed Nivawk into his essence, in order to shapeshift into a more powerful form. Nivawk's wings later appeared on Teridax's shadow titan form during the Battle at the Great Barrier. 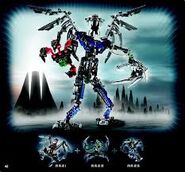 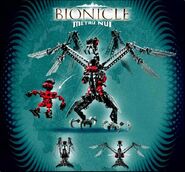 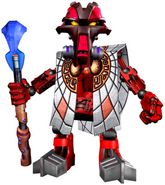 Turaga Dume in the Legends of Metru Nui

£14.99 +
Released
2004 +
ShopDescription
Ruler of Metru Nui! Turaga Dume com … Ruler of Metru Nui!</br></br>Turaga Dume commands the Vahki and maintains order in Metru Nui. His mighty hawk Rahi Nivawk flies above the city watching and listening to all that goes on. What mysterious plans does Dume have for the Matoran, and how will they affect the Toa Metru?n, and how will they affect the Toa Metru? +
Theme
BIONICLE +
Title
Turaga Dume and Nivawk +
Type
Set +
USPrice
$19.99 +
Advertisement