8622 Nidhiki is a BIONICLE set released 2004. He was once a heroic Toa whose betrayal of others caused him to be rejected and turned into a Dark Hunter. His monstrous appearance was caused by Roodaka, who mutated him from his previous form. He is a Titan-class set and comes with 170 pieces.

Nidhiki came to Metru Nui as one of the eleven Toa who fought the Kanohi Dragon, along with Toa Lhikan. Like the rest of his team, he stayed as one of the city's resident Toa.

A thousand years after the arrival of the Toa, the city's leader, Turaga Dume, refused to allow the Dark Hunters to build a base in Metru Nui. The Dark Hunters attacked the city in retaliation, and hundreds of Toa (led by Lhikan) rallied to the city's defence. The war raged on for months, with both sides taking heavy casualties. Seeking to save his own skin, Nidhiki struck a deal with one of the Hunters and agreed to lead the Toa into a trap. However, Lhikan found out about Nidhiki's betrayal and prepared a trap of his own. Less than an hour later, Nidhiki and Lhikan led every Toa in the Coliseum to the Canyon of Unending Whispers in Po-Metru where the Dark Hunters were supposedly staging their attacks. When the Toa arrived at the canyon, however, they were immediately surrounded by the entire Dark Hunter army, which was in turn surrounded by over two hundred Toa reinforcements. This counterattack ended the war with the Toa victorious, with Lhikan kicking all Dark Hunters out of the city-–Nidhiki along with them.[1]

With nowhere else to go, Nidhiki joined the Dark Hunters as an instructor, teaching others from his experience as a Toa. Wanting to be more than a mere teacher, he asked the Shadowed One, leader of the Dark Hunters, to be sent on missions. The Shadowed One granted Nidhiki his wish, but to Nidhiki's displeasure he was paired with a rather dumb brute named Krekka. From the perspective of the Shadowed One it was a good partnership: Krekka would be effective when following Nidhiki's cunning plans, while Nidhiki would be kept in line by Krekka's loyalty to the Dark Hunters.

However, Nidhiki, always cynical and power-hungry, continued to want more, dreaming of being a hero again. When Roodaka came to the Hunters seeking training, he offered to reward her if she would help him escape the Hunters. She pretended to accept, but instead alerted the Shadowed One to Nidhiki's plans and "earned" her training by mutating him into an insectoid monster, ensuring that he could never again be accepted anywhere except with the Dark Hunters. Ironically, Nidhiki was entomophobic, afraid of bugs. The location on the island of Odina where he was mutated was later named Nidhiki Beach.

Two thousand years later, Nidhiki and Krekka were sent back to Metru Nui on a mission for Makuta. Their task was to retrieve six Great Kanoka Disks and to get Toa Lhikan out of the way - an assignment Nidhiki enjoyed, as he still held a grudge over his banishment. While the two were able to capture Lhikan, he had already chosen replacements and set them on the path to become the Toa Metru. Nidhiki blackmailed one of the Matoran, Ahkmou, into helping him get the Great Disks, but this failed as the Toa Metru were able to get to them first. Nidhiki and Krekka continued to hunt the Toa Metru until Makuta decided to face the Toa himself; in order to increase his power quickly he absorbed the two Hunters and his pet, Nivawk, into his body, killing them.[2] 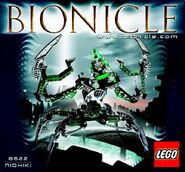 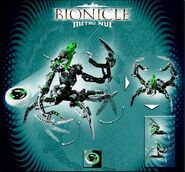 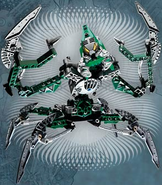 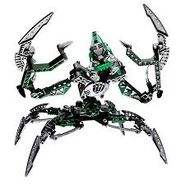 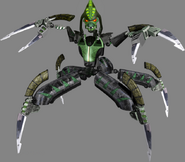 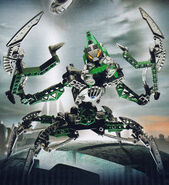 £14.99 +
Released
2004 +
ShopDescription
A Dark Hunter unleashed! Cunning, e … A Dark Hunter unleashed!</br></br>Cunning, evil, and powerful, the Dark Hunter called Nidhiki has already defeated one Toa. Can the rest hope to stop him? His pincers and energy blasts can fell any foe, and he can launch Kanoka disks from his jaws. He will track the Toa Metru anywhere to see them captured and helpless!nywhere to see them captured and helpless! +
Theme
BIONICLE +
Title
Nidhiki +
Type
Set +
USPrice
$19.99 +
Advertisement