It contains Takanuva in his partly light-drained form after reaching Karda Nui, with a Midak Skyblaster, a Power Lance, and the altered Mask of Light.

Takanuva is the Toa of Light. He can fire beams of light, banish darkness, create blinding flares and create holographic projections. He was briefly seen in this form, the Toa of Twilight, after being attacked by a shadow leech and having his light powers balanced with shadow due the exposure. He was later cured by exposing himself to the sonic scream of a Klakk, which shattered the shadow present in his body. 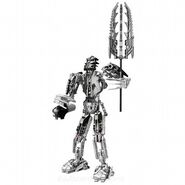 Retrieved from "https://brickipedia.fandom.com/wiki/8699_Takanuva?oldid=1967428"
Community content is available under CC-BY-SA unless otherwise noted.