8707 Boulder Blaster was a set released in January 2009 as part of the Power Miners line (being set number 7 in the series). Included are Rex and Glaciator Minifigures and two blue crystals are also included. It was a limited edition set, released as a Toys "R" Us exclusive. It has 293 pieces. 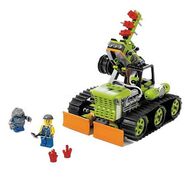