Brickipedia
Register
Don't have an account?
Sign In
Advertisement
in: Class 4 articles, Sets listed for ages 8-14, 2009 sets,
and 2 more
English

8708 Cave Crusher was released in June 2009 as part of the Power Miners line (being set number 9 in the series). Included are Duke, Rex, and Tremorox monster Minifigures. The set consists of 259 pieces, which mainly make up the vehicle used to collect the crystals. This set is Special Edition, and is a Target exclusive.

Although this set was scheduled to be released alongside 8709 Underground Mining Station in the August 2009 wave, it began appearing in some LEGO brand stores in Istanbul, Turkey, in June 2009, as did 8709. It has been released in the U.S. and Canada on October 1 2009 (It is a Target exclusive for the U.S., a normal set in Europe, a Kmart exclusive in Australia and a Zellers exclusive for Canada). 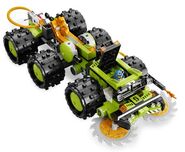 The Cave Crusher with open hatch

The Minifigures and drill station included