Brickipedia
Register
Don't have an account?
Sign In
Advertisement
in: Class 1 articles, Sets listed for ages 8 - 14, 2009 sets,
and 4 more
English

8709 Underground Mining Station is a LEGO Power Miners set released in 2009. The set contains 637 pieces, and is a limited-edition Toys-R-Us exclusive. It contains four minifigures: Rex, Geolix, and two versions of Duke (one of whom may be supposed to represent a generic miner character).

The Underground Mining Station is made up primarily of two towering structures - namely, the primarily coloured lime-green control tower with the dynamite rack, and lookout tower that receives crystals. The Underground Mining Station in measurement is 58 cm/23.2 inches in length and 37 cm/14.8 inches in height. Both towers are connected by a black cable, which is supported underneath by a long fuel line. A small remote-control mining truck is also included with the set. All are constructed on top plates of varying size; these plates feature neon-green and grey sloped bricks stylized to resemble crystal and rock formations. The cable is host to a pulley-powered bucket connected to a lookout tower. The system can be moved either by the large lime-green wheel at the rear of the tower or by the small black gear opposite. When pulled into the lookout tower, the bucket is tipped by a pair of rods and its contents are unloaded into the chute inside the lookout tower. The small mining truck can receive the load below.

The control tower's dynamite launcher features four flick-fire dynamite missiles above the controls towers cabin roof. The roof section is also removable and, on a sticker, reads the number "11" printed in a rusty fashion. The control tower's cabins design is mostly surrounded with white flat windows and lime-green walls. It sits on four black supports. The black cable extends from the structure and ascends to the lookout tower. The rear is the entrance of the control tower for minifigures with two barb wire coils and a ladder on the side the exterior in addition. The interior of the cabin has a grille and hole floor, a fire extinguisher and several sloped bricks printed with control panels. Beside the control tower is a grille platform at the end is brown basket of three carrots on the ground. The ground of the control tower consists of an area of 12x16 in dark grey plates and has several sloped bricks stylized to resemble crystal and rock formations.

The middle has a fuel line with two grey valve wheels on one side, a small control panel on 8x8 grey plate and a black fence for minifigures to stand on as a platform is in the center of the fuel line structure. The long cable above the fuel line is an orange bucket attached above the cable by a small light grey wheel. The orange bucket is also connected at front to a grey hook piece tired onto a string that can be pulled upwards via by a gear system by turning the large lime-green wheel on the lookout tower.

The lookout tower is the largest structure of the set, it main function is the chute in which the orange bucket along the cable tips the crystals into the chute via two orange TECHNIC rods mounted on each side of the chute attached to a TECHNIC lift-arm piece with diagonal black and white glow-in-the-dark stickers. The chute automatically tips the crystal on an angled slide below where the crystals are deposited. The ground is very similar to the control towers ground terrain, it has sloped bricks formulated to appear like crystals and rocks and the lookout tower stands on four pillars above. However, the the area is a 12x16, but rotated 90 degrees compared to the control tower's base 12x16 plate. It has room beneath for a small vehicle to go through the lookout towers pillars. The four black pillars are taller than the control towers.

At the rear of the chute area sits a small lookout area on four smaller pillars identical to the pillars used on the control towers. The lookout area contains a large rotatable light, also capable of moving up and downwards, and several control panels with two antennas and machinery on the sides. This is also where the cable that pulls the transport bucket meets.

The Mining truck is the sole vehicle of the set. It is a small four wheeled vehicle which has no cockpit for minifigures. It has a tilt-able lime-green bucket piece at the rear with two control sticks on each side, two additional small light at the front and a orange bulldozer tray piece at the front for collecting crystals. The tray is moveable and able to dump its contents into the bucket behind.

The Underground Mining Station was a base operated by the Power Miners during their expedition underground, used to harvest crystals. It is seen in this set under siege by the Rock Monster Geolix. 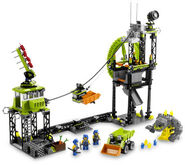 The Mining Truck (on box)

The Underground Mining Station in a LEGO catalogue