8731 Toa Kongu is a BIONICLE set released in 2006. It is one of the six Toa Inika. He is armed with a Zamor sphere launcher and a Laser Crossbow. He wears the Suletu, the Great Mask of Telepathy. In the BIONICLE universe he was a Toa of Air. This is Kongu's first appearance in a regular set (second including his appearance as a set that came with a Happy Meal at McDonalds). He was transformed into a Toa by a bolt of lightning from the Red Star. 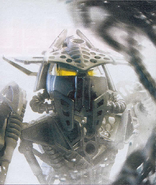 Retrieved from "https://brickipedia.fandom.com/wiki/8731_Toa_Kongu?oldid=657633"
Community content is available under CC-BY-SA unless otherwise noted.