Brickipedia
Register
Don't have an account?
Sign In
Advertisement
in: Class 4 articles, Sets listed for ages 8-16, 2006 sets,
and 4 more
English

8733 Axonn is a BIONICLE Titans set released in 2006. He is notable among BIONICLE sets because of his articulated fingers.

Axonn is a Titan, a sub-series of large BIONICLE sets. He carries the Great Axe. He wears the Kanohi Rode, the Great Mask of Truth.

In the BIONICLE universe, he was a member of the Order of Mata Nui that was stationed on Voya Nui to protect the Mask of Life, along with the powerful warrior Brutaka. When Brutaka vied for the Mask himself and betrayed the Order, Axonn stopped him. Axonn was a great ally to the Toa Inika/Toa Mahri during the 2006-2007 story, assisting them in times of need and giving them the Toa Terrain Crawler, a giant rahi he rebuilt into a vehicle. 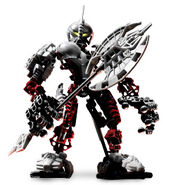 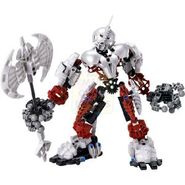 I … Mysterious fighter for the Light!</br></br>Immensely powerful, Axonn was a champion of justice long before the first Toa ever came to be. He has vowed to fight the Piraka and keep them from stealing the Mask of Life! Axonn wears the Kanohi Roden, the Great Mask of Truth, which can pierce any disguise and spot any deception. His enormous axe can cleave a mountain in half, and fires pure energy from its blade!</br></br>* Axonn stands over 9" (over 22cm) high!</br>* Includes Great Mask of Truth!2cm) high!