Brickipedia
Register
Don't have an account?
Sign In
Advertisement
in: Class 3 articles, Sets listed for ages 7+, BIONICLE,
and 3 more
English

8743 Visorak Boggarak is a BIONICLE set released summer 2005 in United States. It is one of the six Visorak sets. It contains 47 pieces, including a Rhotuka spinner and launcher.

A mini Boggarak was included in the Battle of Metru Nui, Visorak Battle Ram, and Tower of Toa playsets of 2005, as well as the non-canon Visorak's Gate playset released the same year. The mini Boggarak was a single piece molded in black and glow-in-the-dark plastic. Between its mandibles (which were distinct from those of the other mini Visorak breeds) was a clip by which it could be attached to “Visorak webbing” pieces included in each of the sets.

The Boggarak are a species of Visorak, and the only Visorak to have three powers in their Rhotuka: They can make a target in water swell up and float to the surface, or dehydrate a target on land to the point where it crumbles to dust. They also possess the default paralysis spinner. Their natural ability is to emit sonic waves from their mouths which transmute enemies into stone or gas. These Rahi, though being poor swimmers, can swiftly “skate” atop water.

During the invasion of Metru Nui, these Visorak were fiercely loyal to Roodaka, to the point they jumped without hesitation when their Queen ordered them to leap off the Coliseum.

When Toa Vakama returned to Metru Nui in his search for the Vahi, Teridax conjured an illusion to trick him. The Makuta made a Boggarak play Nokama in this illusion. This Boggarak was later used by Teridax to distract Voporak, who merely aged the Visorak to dust.

These are the only Visorak whose spinners contain two powers, which can apparently be switched back and forth by the Boggarak. When used underwater, they cause a target to swell up and float to the surface. When used on land, they remove all moisture from a target, reducing it to a pile of dust. Boggarak are also able to create a sonic hum that can transmute solid matter to gas. 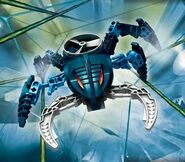 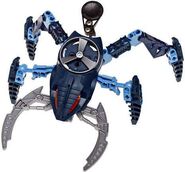