Brickipedia
Register
Don't have an account?
Sign In
Advertisement
in: Class 3 articles, Sets listed for ages 7+, BIONICLE,
and 2 more
English

8746 Visorak Keelerak is a BIONICLE set released in early 2005 in Europe. It contains a Keelerak, one of the breeds of Visorak.

8746 Keelerak was released as a canister set in the winter of 2004 / 2005 in Europe, and in the summer of 2005 for North America. It contained 48 pieces, including a Rhotuka and Rhotuka launcher. Pieces from the set could be combined with the pieces from 8745 Roporak to create a Chute Lurker; with those of 8742 Vohtarak and 8744 Oohnorak to create a Parakrekks; or the other five Visorak sets to make the Zivon.

A mini Keelerak was released in the 2005 playsets Visorak Battle Ram, Battle of Metru Nui, Tower of Toa, and Visorak's Gate, the last of which is non-canon. The one-piece figure was molded in a blend of black and glow-in-the-dark plastic. Like the other mini Visorak, the mini Keelerak featured a clip between its mandibles with which it could grasp the Visorak webbing pieces included in each of the sets, but Keelerak could be distinguished from the other mini Visorak by the shape and texture of its mandibles.

Keelerak are a breed of Visorak unlike any of the others. They are undisciplined and wild, wanting to fight one moment, then disappearing to do something else the next. Keelerak are known as the most powerful Visorak, they have incredibly powerful Rhotuka, able to dissolve through almost anything with a powerful acid, even Protosteel. Their feet are also razor sharp, and they are able to leap into the air and spin about, like gigantic buzzsaws. The least disciplined of the hordes, the Keelerak once tried to rebel and have one of their own as leader, and in return got hit by Sidorak's obedience spinners. 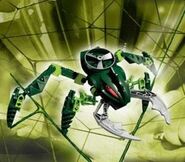 £5.99Additional prices: +
Released
2005 +
ShopDescription
Nothing gets in their way!

Obstacle … Nothing gets in their way!</br></br>Obstacles melt away before the acid spinners of the Keelerak! By leaping and whirling, Keelerak can become living buzzsaws and defeat multiple foes at once.</br></br>* Includes building instructions to combine with #8745 Roporak to make Chute Lurker!</br>* Rhotuka spinner launches up to 50 feet/15 metres!</br>* Visorak measures over 7 inches/17 cm wide by 5 inches/12 cm long!</br>* Jaws snap shut! by 5 inches/12 cm long!