Brickipedia
Register
Don't have an account?
Sign In
Advertisement
in: Class 4 articles, Sets listed for ages 7-16, BIONICLE,
and 5 more

8757 Visorak Battle Ram is a BIONICLE Playset released in 2005. In the BIONICLE storyline, they are battle rams pulled by at least five Visorak. They were manufactured in Xia, and Roodaka took some to Metru Nui.

A Visorak Battle Ram was released as one of the four playsets of 2005. The set also featured minifigures of the six Toa Hordika and a Visorak from each of the six breeds. A Visorak minifigure could be mounted on the golden Keelerak-shaped ram. The top of the ram also featured a catapult that could fling flaming boulders. The prototype set was called Visorak Mother, and was a large green and yellow bug pulled by Visorak.

Matau and Nokama once hitched a ride on the bottom of a battle ram in an attempt to sneak into the Coliseum. They were instantly discovered by Roodaka who then told the Visorak to burn the ram due to "a malfunction". Upon arriving at the furnace, Matau created a tornado to bring Nokama and him to safety, along with the battle ram and its Visorak drivers. 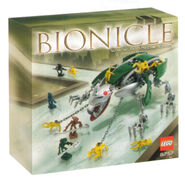