Brickipedia
Register
Don't have an account?
Sign In
Advertisement
in: Class 3 articles, Sets listed for ages 7-16, BIONICLE,
and 4 more

8758 Tower of Toa is a BIONICLE Playset released in 2005. It includes six Toa and seven Visorak minifigures. The set comes with a large Kanohi tower crafted by the Visorak connected to a rock formation sided with two black torches. The tower has many designs on it, including a claw on the top and even two long green webs spun by the Visorak.

This set comes with each of the Toa Hordika minifigures and six Visorak minifigures. It also comes with a huge Kahgarak (compared to the minifigures) with a golden head that has a cannon in it. The Tower itself comes in three parts, the middle part with a cannon and a gate shaped like a Kiril, the Kanohi Mask of Regeneration, a left part, and the right part with a boulder launcher. There are two webs hanging from it. In the BIONICLE universe, it was originally a tower created by the Visorak, but was later captured by the Toa Hordika. The Kiril shaped gate was charged with elemental energy so it would hit anybody who touches it with its elemental energy. 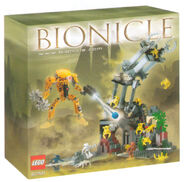 The Prototype version with the scaled-down Keetongu and yellow Visorak.