Vezon was created in an accident with the Spear of Fusion. Upon finding it, Hakann set it off in reverse and split Vezon out of Vezok. He was named "Vezon" by Thok for the Matoran word meaning "double." This unnatural creation led Vezon to lack the spine of a true Skakdi, Elemental Powers, and his sanity. Vezok also lost his tactical thinking in the split, and became desperate to re-fuse Vezon into himself to regain it. Vezon then betrayed the other Piraka after finding out about the Kanohi Ignika, the Mask of Life, leaving them to deal with the Mana Ko that had attacked. Vezon stole the Spear of Fusion and went to Voya Nui in a canister Teridax obtained from an Order of Mata Nui member.

When he arrived on Voya Nui, he discovered the secret staircase, and was allowed past all of its defenses as a result of being wanted by the Ignika for a protector. Upon arriving in the Chamber of Life, Vezon attempted to take the mask, but was instead cursed by it. He was fused to an enlarged spider Rahi, a Fenrakk, given the power of foresight and the ability to absorb kinetic energy, and the mask fused itself to Vezon's head, making him one of its guardians. Vezon remained in the chamber for the next few weeks, toying with the Spear of Fusion and waiting for his quarry to arrive.

When the Piraka came to the Chamber of Life, they were shocked that Vezon had made it to the mask and that he had become one of its guardians. They demanded that he deliver it to them, to which he agreed if they killed Vezok in exchange, in order to prevent the risk of being fused back together. The Piraka then attempted to kill Vezok, who stopped them using his capability of borrowing others' powers and Zaktan revealed his assumptions about the mask being fused to Vezon's head. Vezon, admitting the truth of what Zaktan had said, used the Spear to fuse together Vezok and Reidak together into the Piraka Fusion to fight the other Piraka.

When the Toa Inika arrived in the chamber, Vezon defused Reidak and Vezok, who fell unconscious. The Toa attacked Vezon, who resisted the majority of their attacks due to his ability to absorb kinetic energy. The Toa eventually realized that this was his power, and managed to work their way around it. After being driven towards the edge, Vezon chose to urge his steed into the lava. He emerged riding the powerful Kardas Dragon, which the Mask of Life had transformed Fenrakk into. Kardas' raw power overwhelmed the Toa, forcing them into a defensive position. Jaller, seeking to buy time, told Kongu to use his Suletu on the Ignika, find its thoughts, and thrust them into Vezon's mind. Vezon halted his attack on the Toa Inika, shocked that the mask desired Matoro over him. In anger, he attempted to fuse Matoro with the chamber's lava, but Jaller quickly used a Zamor sphere given to him by Axonn. This sphere suspended Vezon and Kardas in a stasis field, allowing Matoro to take the Ignika from him. With the mask gone, Vezon lost the powers it had granted him and sunk to the floor of the chamber, unconscious.

When all of the Piraka awoke, Vezok attempted to force them to fuse Vezon back into him, but Reidak instead broke the Spear of Fusion into four pieces and they left the chamber. When Vezon himself awoke, he used the Spear's own power to repair it. He then followed the Toa Inika down The Cord. When he encountered them, he smashed Matoro's head into the wall, and in the ensuing conflict, had his weapon burnt to ashes by Jaller. Vezon was later carried off by the Zyglak after unsuccessfully trying to trade the Inika's lives for his.

As a result of his creation, Vezon has no unique powers of his own that the other Skakdi possess. He is also insane, but despite this, he is a great tactician, and retains all of Vezok's memories.

The Kanohi Ignika granted Vezon a variety of powers as a guardian to make up for his lack of them. He was given the ability to see into the future, but it was limited in that he could not see very far. Vezon was also given the ability to absorb kinetic energy. If something were to hit him, or he hit something, his strength would increase. This power gave him invulnerability to physical attacks, since he would immediately grow strong enough to withstand the attack after being hit. He shared this power with Fenrakk. When Fenrakk was transformed into Kardas, he could no longer share this ability with his steed. Wearing the Kanohi Ignika granted him the mental discipline to use great Kanohi masks, unlike most Skakdi.

As all of Vezon's powers were granted to him by the Ignika, he was rendered powerless after the mask left him, although he frequently forgot this.

Vezon wielded the Spear of Fusion, which could merge beings together or split them apart. The Spear of Fusion could not separate Vezon from Fenrakk, as it was nowhere near as powerful as the Kanohi Ignika. Vezon used the Spear to fuse together Vezok and Reidak, creating a monstrous Piraka Fusion which he attacked the remaining Piraka with. After they were unfused, Reidak snapped the Spear into several pieces. However, it was still operational, and he reformed the spear using its own power. Jaller later burned the Spear of Fusion to ashes.

Vezon was temporarily given a powerless spear by Brutaka for use in their mission to free Miserix, which was taken away when Vezon was imprisoned on Daxia. After being released, he was given a small dagger. He now bears a looted Mask of Dimensional Gates, the last known in the Matoran Universe. When he was hit by a wave of Energized Protodermis, he was fused with the Kanohi Olmak, and now has the ability to instantly shift between locations. However, he currently has no control over when these portals open and where they lead.

After making his way to the Chamber of Life, the insane Piraka Vezon attempted to steal the Kanohi Ignika. Upon touching it, he became cursed by its power. A Fenrakk spider was enlarged as a result of the curse and fought Vezon. Soon, the Mask of Life fused Vezon to the spider, creating two new guardians for itself. The enlarged Fenrakk gained Vezon's new power of absorbing kinetic energy, and the two waited for someone to claim the Ignika.

Soon the Piraka arrived to attempt to take the Ignika for themselves, but stopped short upon encountering their former ally and his vicious arachnid counterpart. Vezon defeated them easily, transforming Vezok and Reidak into a hulking combination of the two which dispatched the other four.

The Toa Inika soon burst into the chamber as well, just in time to see Vezon defuse the beast, rendering all the Piraka incapacitated. Fenrakk charged the Toa, engaging them in combat. During the battle, Vezon showed off their shared ability to absorb kinetic force by slamming Fenrakk repeatedly with a rock. The Inika managed to gain an edge in battle, but Fenrakk tapped his foot repeatedly on the ground, recovering his wounds. While fighting, Jaller attempted to force Vezon and his mount back towards lava, in order to get them to surrender. Much to the Toa's surprise, Vezon instead willingly urged his steed into the lava, where the Ignika transformed the enlarged Fenrakk into the Kardas Dragon.

All Fenrakk Spiders (including Fenrakk Spawn) have great strength and acidic saliva.

The enlarged Fenrakk also shared Vezon's ability to absorb kinetic force. In addition, while Vezon was in possession of the Mask of Life, this Fenrakk would come back in a stronger form each time he was defeated, as he did during his transformation into Kardas. 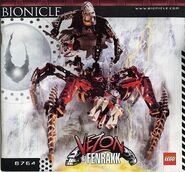 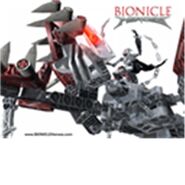 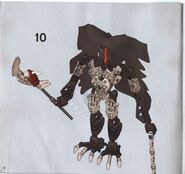 Retrieved from "https://brickipedia.fandom.com/wiki/8764_Vezon_and_Fenrakk?oldid=1075357"
Community content is available under CC-BY-SA unless otherwise noted.