As a special feature, this set included two different sets of ornamental pieces that allowed to decorate the castle for either the good or the evil faction, although originally conceived as royal residence for the good side.

The castle is built upon a raised baseplate that has the same shape as to the one in King Leo's Castle, and thus features a similar structural layout as the older castle.

The baseplate has two hill ridges separated by a wide trench. Each ridge ends in two large bumps which have large recesses in their middles. The castle itself consists of one larger segment, built on a plate that bridges the gap between the ridges and four smaller segments positioned on top of the bumps at the baseplate's corners. At the front of the baseplate, right at the fore opening of the trench is a separate main gate with a portcullis.

The large central segment contains a great hall on the main level in which a treasure chest is kept. The upper level contains a room with a throne which is positioned on a 4x4 turntable. The topmost level comprises a small turret with crenelations. The two smaller segments that sit on the rearmost extends of the baseplate's ridges are largely similar in design. They are each one story high with crenelations and rotatable weapon stands on top. The one on the right has a revolvable wall piece with a skeleton on it, at the back. The left segment is a jail cell that is closed with ladder pieces on the back. The two foremost segments are mutually similar as well. They are both low turrets with crenelations on top. The right one has a fixed crossbow on it, while the turret one on the left is equipped with a catapult that can fire large hollow rock pieces. Both turrets are lower than one story, making their interiors to small for Minifigures. The hollow space in the right turret is barred at the back and contains a spider.

The castle features a large number of colored columns which are revolvable, allowing to show either their red or blue sides to signify which faction is currently in possession of the fortification. This feature also involves turning around the gate section, which sports blue pieces on one side and red pieces on the other. The small ornamental flags can be flipped up to show their alternative side, while the large lion flags on the towers have no red equivalent and must be hidden.

The siege engine of the attack force resembles a scorpion, having a catapult in its "tail" and movable "mandibles". The ammunition of the catapult consists of scorpions. 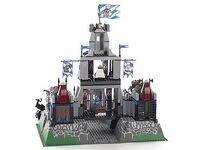 The back of the castle

Switching the castle from good to evil

A glorified image of the castle 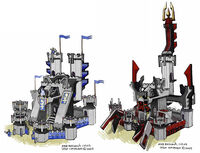 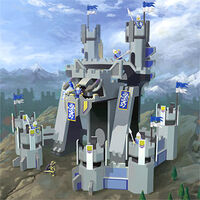 Concept art for the "good" castle 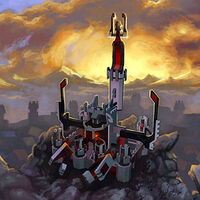 Concept art for the "bad" castle