8782 Danju is a Knights' Kingdom II set released in 2004. It comes with Danju, his shield, and his sword. It also comes with three game cards.

Danju was a knight earlier than Santis or Rascus. He was a trainer of many knights in the Morcia Kingdom. He is the oldest knight of the four knights trying to save the kingdom and his knightly symbol is the Wolf. 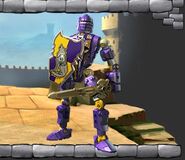 Retrieved from "https://brickipedia.fandom.com/wiki/8782_Danju?oldid=1967033"
Community content is available under CC-BY-SA unless otherwise noted.