Vladek has a red torso with a black scorpion emblem on it. On either side of his head, his torso armour forms spikes that jut upward. He has large armour plates on his shoulders and shins. The shoulder plates cover his upper arms as well as shoulders and his shin plates cover his knees part of his feet as well. His forearms and thighs do not have these large pieces on them, but have traditional LEGO pieces attached.

Vladek carries an ornate black sword and a red shield. The shield is outlined in silver and has a large, black scorpion emblem in the middle. This emblem, like his chest emblem, is not printed on but is in relief. The scorpion on his shield differs slightly from the one on his chest.

Vladek's helmet is sleek and streamlined, with two eye holes rather than one opening like his old one. It is black at the bottom and middle, but at his eye level the black fades to red. The visor is the same mould as the Vlad-Mask, but in a different colour.

Three game cards are also included in the set.

When Vladek escaped prison after being defeated by Jayko, he fled to the lost kingdom of Ankoria, straight to his secret fortress. There, he donned new armour and, using his powers as a sorcerer, constructed the Vlad-Mask, a giant mask set in his fortress that, when completed, would make him unbeatable. But the knights of Morcia staged a daring attack on his fortress before the mask was complete. While King Mathias's army sieged the fortress and fought Vladek's forces, Sir Jayko and King Mathias slipped inside. There, Jayko and Vladek faced off, but instead of fighting the Scorpion Knight, Jayko destroyed the nearly completed Vlad-Mask. Vladek's fortress crumbled and he just barely managed to escape. It would be many years before he attempted to take over Morcia again.

The box and instructions image

Vladek with his mask up

Vladek and Jayko face off 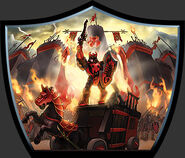 Vladek and his fortress 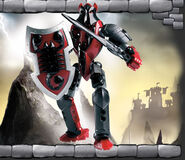 T … The sinister Lord Vladek returns!</br></br>The evil Scorpion Knight is back, more cunning and dangerous than ever before! His new mask reflects the power of the Dark Fortress. Can the Knights of Morcia stop him, or will Lord Vladek rule over all?</br></br>* Includes new helmet, armor, sword and shield.</br>* Features new side-slashing arm movement, the Scorpion Sneak Strike!</br>* Stands over 7.5 inches/19 cm high!rike!