Brickipedia
Register
Don't have an account?
Sign In
Advertisement
in: Class 4 articles, Sets listed for ages 6+, 2004 sets,
and 3 more

8800 Vladek's Siege Engine is a Knights' Kingdom II set released in 2004. It comes with a red and black siege engine, Vladek, and a Shadow Knight. It was created so Vladek can lay siege to Castle Talonjay, which is in Jayko's province. 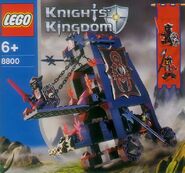