8804 Minifigures Series 4 is the fourth series of Collectable Minifigures, released on April 1, 2011 in most countries.

The fourth series sports a bright orange packaging theme. Each minifigure comes in an individual opaque polybag, along with a black stand, some accessories and a paper checklist. The bump code system that was introduced in 8803 Minifigures Series 3 is retained, and again changes from batch to batch. The level of detail on the minifigures continued to rise with this series, with more minifigures than ever before featuring back printing and full-colour accessories.

The minifigures included in this collection are: 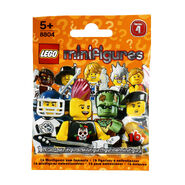 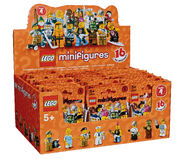 The Series 4 homepage on Lego.com.

Retrieved from "https://brickipedia.fandom.com/wiki/8804_Minifigures_Series_4?oldid=1930448"
Community content is available under CC-BY-SA unless otherwise noted.