8811 Toa Lhikan and Kikanalo is a BIONICLE set released in 2004. It comes with Toa Lhikan and the Rahi Kikanalo. Toa Lhikan has two Lava Greatswords in his hands and has a Metallic Sand Yellow coloured Great Hau, the Mask of Shielding, in the shape of a Noble Hau. His shoulders, feet, upper leg armour, and upper chest are also metallic sand yellow. The rest of him is dark red with yellow eyes. In the BIONICLE universe, he was a Toa of Fire. The Kikanalo metallic with red eyes. In the BIONICLE universe, they were herd animals.

7216 is a set often considered to depict Lhikan as a Turaga.

6,000 years before the Great Cataclysm, Lhikan was a novice Toa serving on an island fortress besieged by Frostelus. The day before the fortress' treasure - the Makoki stone - was to be moved to a safer location, two thieves, Hakann and Vezok, successfully stole the stone. The next day, the Frostelus overran the fortress and wiped out the Toa, with Lhikan the only survivor.

3,000 years later, Lhikan came to Metru Nui as part of a team of eleven Toa. Their goal was to stop the Kanohi Dragon that the Dark Hunters had unleashed on the city. Once the beast was defeated, Lhikan helped deport the dragon to Xia, Roodaka's home island. The Toa then stayed as the city's protectors, with Lhikan having a home in Ta-Metru.

At one point in the years following, Lhikan investigated the murders of some Matoran. Supposedly, the Dark Hunters had committed the crimes to intimidate his teammate, Toa Tuyet, into giving up a powerful item called a Nui Stone. While the Hunters were after the Nui Stone, it was Tuyet herself who committed the murders; hoping the Hunters would be blamed and driven off. Lhikan and another teammate, Toa Nidhiki, confronted Tuyet and defeated her despite her use of the stone's power; and Lhikan destroyed the stone over Nidhiki's objections. Tuyet mysteriously disappeared from custody soon afterward, and was never seen again.[1]

By the time of the war with the Dark Hunters a thousand years afterward, Lhikan had become known for his brave leadership and became the chief commander of the Toa in the war. He proved a scourge to the Hunters, defeating "Vengeance" in one-on-one combat and leading the group that overcame "Tyrant"; both swore vengeance on Lhikan. When Nidhiki betrayed the Toa and helped the Dark Hunters lay a trap, Lhikan discovered his treachery and planned to set up a counter-trap. However, Hakann, who was now with the Dark Hunters, caught him and bargained for the Hunters' freedom, offering the Makoki Stone in exchange. Remembering how his teammates had given their lives to protect the stone, he agreed - adding the condition that the Hunters take Nidhiki with them. Lhikan's actions won the war for the Toa, and Lhikan expelled Nidhiki and all the Dark Hunters from the city.

Another two thousand years later, Metru Nui's remaining Toa were being sent out on missions from which they never returned until only Lhikan was left. He became suspicious of the city's leader, Turaga Dume, and when two Dark Hunters showed up in the city - one of them being Nidhiki (who was now mutated into an insectoid monster) - he became worried. He decided to steal six Toa Stones from the Great Temple, charge them with his Toa Energy, and give them to six Matoran. However, just as soon as he finished he was captured by the Dark Hunters and secretly thrown into a hidden prison, only having time to warn Vakama to save "the heart of Metru Nui".

The Matoran brought the Toa Stones to the Great Temple, where they were transformed into the Toa Metru. This transformation drained Lhikan's power, turning him from a Toa to a Turaga.

Three of the Toa Metru - Onewa, Whenua, and Nuju - were later arrested and thrown in Lhikan's jail cell, though he disguised himself so none of the three could recognize him. There, he helped the three discover their mask powers by giving them seemingly pointless tasks to perform and learn from; Nuju's activation of his telekinesis power in particular allowed them to escape. Meeting up with the other Toa, Lhikan revealed his identity and asked if "the heart of Metru Nui" was safe; Vakama thought he had meant himself, but Lhikan clarified that he meant the Matoran. The group then discovered the true Turaga Dume lying unconscious in a Matoran Sphere, and rushed off to confront the fake.

They discovered that Makuta had been the one posing as Turaga Dume, and as the Great Spirit Mata Nui fell asleep, the Toa Metru and Turaga Lhikan raced to escape the crumbling city. Makuta gave Vakama a chance to go face him alone, though Lhikan slipped away and followed. By the time Lhikan got there, both Makuta and Vakama were stuck in slow-motion (thanks to the Vahi Mask of Time) and Makuta was launching a deadly attack that Vakama wouldn't be able to dodge. Lhikan quickly jumped in the way of the blast, but it overpowered his mask's shield. He fell to the ground, heartlight flashing, with Vakama bent over him. Lhikan thanked Vakama, and spoke of his pride in fighting beside him. Lhikan then gave his mask to Vakama, and died moments later.

Not too much later, Vakama found evidence that Makuta had tricked Lhikan into choosing the wrong Matoran to be Toa. Determined to find the truth, he broke into Lhikan's home and found Lhikan's journal, the last entry of which seemed to confirm that Lhikan had been influenced away from choosing the destined Matoran. It was only later discovered that while Makuta had influenced Lhikan's choices, the Order of Mata Nui had tricked him and made him direct Lhikan to the correct Matoran.

The Toa Metru, particularly Vakama, did not want such a brave hero forgotten, so they made some monuments to Lhikan's memory:

When traveling to and from the island of Mata Nui, the Toa christened their transports the Lhikan and the Lhikan II, respectively.

Upon waking the Matoran on Mata Nui, they found that the mask of a Ta-Matoran named Jaller had broken. As a replacement, Vakama gave him Lhikan's Noble Hau, which changed shape to that of a normal Great Hau (as opposed to its original Great Hau shape, which was quite different from those usually seen in Metru Nui). This proved especially fitting, as Jaller followed Lhikan's footsteps somewhat as the courageous Captain of the Ta-Koro Guard. However, this Hau recently was lost in the realm of Karzahni when Jaller was forced to abandon it and replace it with a Calix Mask of Fate, and Jaller (now a Toa himself) has vowed to reclaim it when he gets the chance. The Toa Nuva, who are friends of Vakama and Jaller, recovered the mask (now once again a Noble Hau) after defeating Icarax.

Once awakened, the Matoran had no memory of Metru Nui, or Lhikan. Not wanting to remind them of a home they may never see, but also not wanting Lhikan to be forgotten, Vakama invented tales of a Matoran named "Lhii" that were based on Lhikan's adventures. Lhii was said to be the island's greatest lava surfer, and was "in the clan of Jaller" (subtly referencing the fact that Jaller wore Lhikan's old mask). According to the tales, Lhii had died some time ago in a lava surfing accident. Now that the true tales of the Toa Metru and Metru Nui have been told, the Matoran understand that "Lhii the lava surfer" was actually Toa Lhikan.

A thousand years after his death, the Mask of Life brought the Toa Inika's (including Jaller's) knowledge of Lhikan to life as one of the first trials in their quest to claim it. This Lhikan expressed amazement at the Toa Metru's successors, and warned them to turn back. When challenged by Toa Jaller, he admitted that he himself would not abandon such a vital quest, "but, then, look what happened to me."[2] He then disappeared, allowing the Toa to proceed.

When Karzahni used his Kanohi Olisi to trap Toa Lesovikk, Toa of Air from the first ever Toa team, in a vision of an alternate timeline, Lesovikk found that had his team survived they would eventually have met Lhikan and saved his original group of Toa from being destroyed by Frostelus. Lesovikk, impressed by the rookie Toa, considered recruiting him to his own team until he realized the falsehood of the illusion and escaped it.

As a Toa of Fire, Lhikan could control heat, create and absorb flame, and manipulate fire in a number of other ways. He wore a Kanohi Hau, the Great Mask of Shielding, which allowed him to defend against any physical attack he was aware of (but not ambushes); this Hau was an exotic version of the regular mask design, and had a different shape than those usually seen on Metru Nui. His weapons were two Great Fireswords which can combine to make a glider board which he stands on and 'surfs'; he could also use this board as a large shield which he has learned to throw with great accuracy.

After becoming a Turaga, his power over fire was greatly reduced (although he still maintained a small amount of this power). His Great Hau became a Noble Hau, which worked the same way but provided a weaker shield; and his Fire Greatswords shrank into a small shield. He also carried a Fire Staff.

After a recent interview with Greg Farshtey, BIONICLE story team leader, it was revealed that after inhabitants of the Matoran universe die, as long as their bodies are intact, they are teleported to the Red Star, where they are to be repaired by the Kestora and sent back to continue working inside the Mata Nui robot. However, the technology inside the Red Star which was supposed to send the revived beings back was broken some time ago by unknown means, leaving them stranded on the space station as a result. As such, it can be assumed that Lhikan is still alive on the space station in his Turaga form, along with a few other characters such as Mavrah, Jovan, Kodan, Botar, Guardian, Ihu, Naho, Nikila, Reysa, Nocturn and Sidorak. However, Mavrah is the only one seen so far (upon Kopaka, Pohatu and Gaardus' investigation).[3] 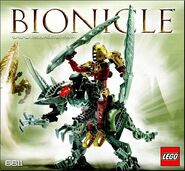 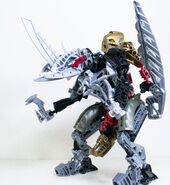 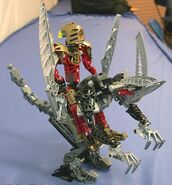 Lhikan in the Movie. 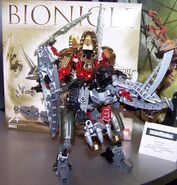