885 Space Scooter is a Classic Space set released in 1978. It was one of the very first sets of LEGO Space. It contains a small spacecraft piloted by a red Classic Space astronaut.

The Space Scooter is a small spaceship, similar in size to a jet ski. It is mostly Old Gray with some Transparent Red and Transparent Blue. It has two lasers for weaponry, and two thrusters. It has the Classic Space emblem on the front. It also has two lights on either side and an antenna.

The Space Scooter was one of Space's smaller scouting vehicles. 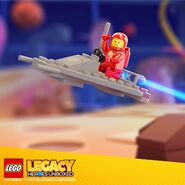