8877 Vladek's Dark Fortress is a 2005 Knights' Kingdom II set. It includes a large castle, two siege engines of the good faction, comprising a horse drawn catapult and a ballista, as well as two horses, a skeleton and several different knights, including Jayko, Rascus, Santis, Danju and Vladek. The Dark Fortress was the largest set of the Knights' Kingdom II line and the main stronghold of the evil faction.

The fortress consists of three large separate segments: the big gate tower and two side walls. The gate tower comprises four storeys in total. On the ground floor is the main gate that has a functional drawbridge in front of it. The first floor houses a mechanism that allows to empty a wooden tub onto trespassers. On the second level is a room with a door as well as an opening in the floor that can be used to drop ammunition into the tub below. On the third floor is an observation platform with a smaller crenelated outlook on its top.

Each of the two sidewalls comprise two storeys with rocky walls at the ground level, as well as a proper castle wall at the first floor. Both can be articulated (via hingebricks at their center) and have towers at their ends. The left wall segment contains a firespitting well and a round table with a crystal ball on the ground floor. A staircase leads up to the upper level, which is largely empty, except for a crossbow, and several spears looking out of the wall. On the top of the wall, behind the battlements, is a rotatable catapult that uses spiked disks as ammo. At the left end is a tower with a balcony in front of it. The tower is built upon an archway and is empty, yet has enough room for minifigures. On its top is an embattled platform.

The wall segment on the right contains a fireplace and several red scorpions on the ground floor, as well as a staircase that leads to the upper level, which featured a revolvable wall with a skeleton and a spider web. Just like the other wall segment, this one has a rotatable catapult that uses spiked disks as ammo at its top. a tower is also included, this time without a balcony.

An evil chariot and two knights

How fire is dropped from above

The interior of the castle 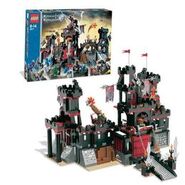