The set 8898 Wreckage Road is a set that was released in June of 2010 as part of the World Racers theme.

The set includes four minifigures - Bart Blaster, Billy Bob Blaster, MAX-treme and REX-treme; two from each of the two teams. Both of the cars contain weapons of sorts, such as rockets, hooks and saws. The set includes a chrome silver trophy and a platform.

The Wreckage Road race is the third World Racers Race.

The Minifigures and trophy. 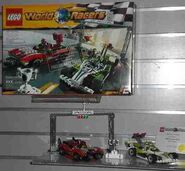 Shots of the cars.