8904 Avak is a BIONICLE set released in early 2006. It contains Avak, who was one of the Piraka. He has the ability to make the perfect type of prison/cage for an enemy out of thin air. He was part of the Dark Hunters organisation before becoming a Piraka. He then went to Voya Nui with the other Piraka to find the Kanohi Ignika. Pushing hard on the rubber piece of his launcher will fire a sphere. 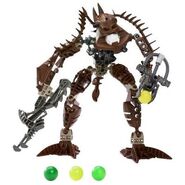