Takadox is blue with red eyes and red spikes on certain spots of his body. His head and certain other pieces glow in the dark. He is armed with twin long, serrated knives on the bottom of both hands and a Squid Launcher on the top of his right hand. He has two holders for the two Sea Squid that he come with on the same arm that he holds his squid launcher.

Takadox is one of the six Barraki. In the BIONICLE universe, he sold off the League of Six Kingdoms while he was still on the land. He had hypnotic powers, where he could hypnotize them by looking them in the eye, and he often hypnotized Carapar into doing his bidding. He also appeared in Federation of Fear serial as part of the team searching for Miserix. He started acting strange when Carapar died and later purposely set off a booby trap while on Artidax, causing the rest of the team to be trapped. 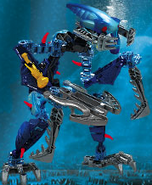 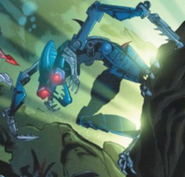 £7.99 +
Released
2007 +
ShopDescription
Hypnotic master of evil! The slyest … Hypnotic master of evil!</br></br>The slyest and most treacherous of the Barraki, Takadox relies on his hypnotize gaze, slashing blades, and sea squid launcher to conquer his enemies. Can the Toa hope to defeat this hideous villain? </br></br>*Includes squid launcher with 2 squid.</br>*Each Barraki features a unique body, face and weapons - collect them all!body, face and weapons - collect them all! +
Theme
BIONICLE +
Title
Takadox +
Type
Set +
USPrice
$9.99 +
Advertisement