Brickipedia
Register
Don't have an account?
Sign In
Advertisement
in: Class 3 articles, Sets listed for ages 7-16, BIONICLE,
and 3 more

He has a tail, a pincer on one hand and a Squid Launcher in the other. Two Sea Squids come with the set. They can be placed in two holders on his shoulders. He is black and grey in colour, with red eyes and broad shoulders. He also has two red spikes on his head and one on each knee pad. 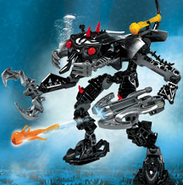 £7.99 +
Released
2007 +
ShopDescription
Lurker in the shadows! The first th … Lurker in the shadows!</br></br>The first thing you'll hear is the shifting of sand … then you'll feel his claws. With his spiked shell, vicious pincers, and sea squid launcher, Mantax hides on the sea floor waiting for his prey. By the time you've seen him, it's much too late!</br></br>* Includes squid launcher with 2 squid.</br>* Each Barraki features a unique body, face and weapons - collect them all!body, face and weapons - collect them all! +
Theme
BIONICLE +
Title
Mantax +
Type
Set +
USPrice
$9.99 +
Advertisement