8920 Ehlek is a BIONICLE set released in 2007. He is one of the six Barraki. He is green with blue eyes and has two Protosteel Tri-talons on his hands, spikes lining his back and a Squid Launcher in his left hand. There are two holders for the two Sea Squid that he comes with on his right hand. In the BIONICLE storyline, he commands an army of venom eels. 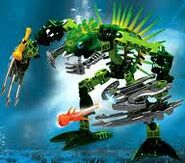 £7.99 +
Released
2007 +
ShopDescription
Sinister serpentine foe! Enemies wh … Sinister serpentine foe!</br></br>Enemies who think Ehlek is an easy target are in for a shocking surprise! If his sea squid launcher and claws are not enough to protect him, he can use his spines to send out electrical bolts at his opponents. With an army of venom eels at his command, Ehlek is out to destroy the city of Mahri Nui!</br></br>* Includes squid launcher with 2 squid.</br>* Each Barraki features a unique body, face and weapons - collect them all!body, face and weapons - collect them all! +
Theme
BIONICLE +
Title
Ehlek +
Type
Set +
USPrice
$9.99 +
Advertisement