8921 Pridak is a BIONICLE set released in 2007. He is the leader of the six Barraki, the main villains of the 2007 storyline. Pridak also comes in minifigure form.

Pridak has two Shark Teeth Blades on the undersides of his hands, a Squid Launcher in his left hand and powerful jaws with Protosteel teeth. Pridak is white with blue eyes and red teeth. The set also includes 2 squid ammo rounds. 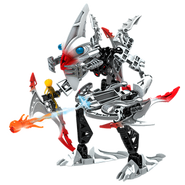 Pridak in the comics
Add a photo to this gallery

£7.99 +
Released
2007 +
ShopDescription
Leader of the Barraki! The deadlies … Leader of the Barraki!</br></br>The deadliest and most ruthless of the Barraki warlords, Pridak rules through fear. With his shark like teeth and sea squid launcher, he leads his legions of Takea sharks against Mahri Nui and the Toa who dare defend it.</br></br>* Includes squid launcher with 2 squid.</br>* Each Barraki features a unique body, face and weapons - collect them all!body, face and weapons - collect them all! +
Theme
BIONICLE +
Title
8921 Pridak +
Type
Set +
USPrice
$9.99 +