8925 Barraki Deepsea Patrol is a BIONICLE set released in 2007. It contains a living patrol craft that two Barraki can ride inside, another Rahi with a Squid Launcher on top that another Barraki can man, and a transport pod for transporting captured Toa Mahri. It also has a jellyfish, three Barraki, and one Toa Mahri. 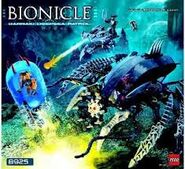 Retrieved from "https://brickipedia.fandom.com/wiki/8925_Barraki_Deepsea_Patrol?oldid=1967902"
Community content is available under CC-BY-SA unless otherwise noted.