Brickipedia
Register
Don't have an account?
Sign In
Advertisement
in: Class 2 articles, Sets listed for ages 8-16, BIONICLE,
and 3 more

8927 Toa Terrain Crawler is a BIONICLE playset released in 2007. It contains all six Toa Mahri, and four of the Barraki.

The Toa Terrain Crawler is a large BIONICLE playset. It includes 10 minifigures. Several solidified air spheres and squid ammo, as well as weapons for the Toa are also included.

The Barraki's steeds:
In this set, Kalmah and Pridak ride upon two large mutant sea creatures. Pridak's steed looks almost like some sort of underwater bat, as it has very bat-like wings. It uses a pure white version of Takadox's head, and has two large claws/legs near the front of it's body. It has a long sinuous tail. Kalmah's steed on the other hand has four legs, a black and white version of Carapar's head, and two different tails.

Jaller's vehicle:
Jaller rides a small mechanical vehicle. It has two stubby arms with spikes on the ends, and appears to be built more for speed then combat.

The Jellyfish:
Another sea creature is included in this set, a jellyfish. The jellyfish's body is made up of several transparent satellite dish pieces, and it's tentacles are made up of several BIONICLE spine pieces, including two rare glow-in-the-dark ones.

The Toa Terrain Crawler:
The Toa Terrain Crawler is the main focus of the set. It consists of three main sections, which are the front, which contains the piloting area, and the middle and back, which can can be used to contain either Toa or Barraki. The front area is an oversized version of Hahli Mahri's mask, The Kanohi Faxon, Mask of Kindred, with windows were the eye hole were, and several tentacles and weapons attached on for good measure. Mounted on the middle sections are both a working Cordak Blaster, and a claw device for grabbing air spheres. On the end of the final sections is located some sort of engine, as well as several tentacles and spikes.

The Toa Terrain Crawler, despite it's vehicle-like appearance, is, in fact, a variety of giant rahi. After the Great Cataclysm, the creature was caught by Axonn, who modified it, adding weaponry, installed techno-organic mechanisms inside it, and then left it chained in an area of the Cord. The Toa Mahri were later guided there by Axonn, and he told them to enter it. They used the creature to transport them to the base of the Cord. Once they reached there, they set the creature free.

The Toa Terrain Crawler on its own 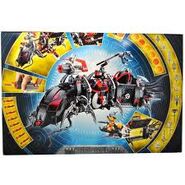