8935 Nocturn is a BIONICLE set released in Winter 2007. It was a Walmart exclusive in the US and contained exclusive glow-in-the-dark parts.

Nocturn lived on a small island with the rest of his species. In a fit of rage, Nocturn struck at a weak point of his former home, destroying it. He was sentenced to the Pit as a result of the massive loss of life due to his action. After the Great Cataclysm, Nocturn escaped into the waters along with the rest of the surviving inmates. Nocturn could have left the Pit due to his amphibious nature, but chose not to, as he recognized that his presence was unwanted anywhere else. Some time after his escape, Nocturn encountered Pridak, who severed one of his arms. Nocturn's regenerative ability gave him his arm back, but without its tentacle.

Nocturn was eventually recruited into the the Barraki's armies, falling into Ehlek's contingent, where he eventually rose to become a lieutenant. He also crafted Pridak's Shark Tooth Blades, using his massive strength to fuse more than 10,000 Takea shark teeth together. Nocturn took to residing in the Razor Whale's Teeth, his preferred area.

He was given the Ignika to hold by the Barraki who did not trust each other to keep it. They also gave him a Squid Launcher to use. However, Nocturn was not destined to use the mask, and was cursed by it. The Kanohi Ignika cursed Nocturn with the power to cause instant death to any being he touched. At first, he enjoyed his new ability, but soon became annoyed by it, as he was no longer able to cause his targets to suffer. While toying around with the ability, he dropped the mask, which enlarged a small marine Rahi called Gadunka.

After growing angry at his power, Nocturn picked up the mask, and set off to ask Ehlek about it. After hours of searching, Nocturn was intercepted by the newly revived jailer, now Dekar-Hydraxon. They fought, and Nocturn was eventually overwhelmed by Hydraxon's skill. Nocturn surrendered, and Hydraxon came into possession of the Mask of Life. When Mantax and Hahli attacked Hydraxon to prevent him from destroying the mask, Nocturn took the opportunity to escape. Nocturn regrouped with Ehlek's army, and was present at the assault of the Barraki's armies on Teridax. After defeating the Makuta, Nocturn joined the feverish chase to recover the Ignika. When the Ignika was lost, and the Toa Mahri out of reach, the warlords broke apart, all attempting to evade capture. Nocturn was eventually re-captured by Hydraxon, and imprisoned in the newly repaired Pit. He was later killed in an attempt to escape. 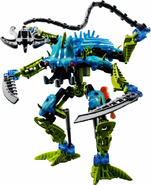 A set image of Nocturn

Nocturn in the comics 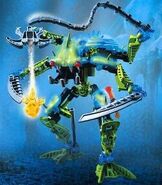 Nocturn is the … Warrior of the sea!</br></br>Nocturn is the warlord of Ehlek's underwater army and an expert in every form of deep-sea combat! With his glow-in-the-dark spines, head, shoulders and legs Nocturn attracts attention even in the darkest corners of the abyss.</br></br>* Includes squid launcher and 2 squid.s.