8953 Makuta Icarax is a BIONICLE set released in February 2008. It contains Icarax, a black and red Makuta with a twin sword, rotating blades, the Mask of Shadows, a Tridax Pod, and wings. It was a Toys 'R' Us exclusive set in the US.

Icarax is a member of the Brotherhood of Makuta, a group originally led by Miserix but later by Teridax, who turned the group against Mata Nui. Icarax was the most skilled warrior among the Makuta, but despised Teridax's convoluted approach to conquest, preferring to use his own might to defeat his enemies. At one point after Mata Nui was rendered comatose he set out from his assigned dominion-the domain of Karzahni-with a force of Manas to lay claim to the universe, only to be challenged by Teridax. After exhausting himself in attacking his foe, Icarax was defeated handily by Teridax and forced to submit to his will.

One thousand years later, Icarax was dispatched by Teridax to recover the Kanohi Kraahkan and the Staff of Artakha, and took to wearing the former before delivering the latter to Teridax in Mahri Nui. He then returned to Metru Nui and unleashed a Shadow Leech intended for Ahkmou, only to have it infect Takanuva instead. Icarax then traveled to Destral, the Brotherhood's base, before being summoned to Karda Nui by Antroz to help battle the Toa Nuva. After suffering defeat at the hands of Toa Ignika, he attempted to thwart Teridax's plans once again before being killed by his fellow Makuta. 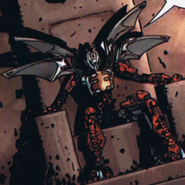 Makuta Icarax in comic
Add a photo to this gallery