Brickipedia
Register
Don't have an account?
Sign In
Advertisement
in: Class 4 articles, Sets listed for ages 7-12, 2009 sets,
and 3 more
English

8957 Mine Mech is a Power Miners set released in January 2009 (being set number 2 in the series). Included are Brains and one Boulderax rock monster minifigures. The bricks from this set, combined with Stone Chopper's bricks, can construct the Cave Cutter vehicle. 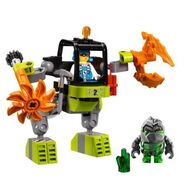 £6.85 +
Released
December 28, 2008 (US and UK) +
ShopDescription
Explore the underground with the Mine M … Explore the underground with the Mine Mech!<br />The one-of-a-kind Mine Mech is an experimental mining walker built to go where the other Power Miners vehicles can’t. Its enhanced movement and armor make it perfect for exploration and emergency rescues, and its spinning plasma cutter and crushing claw make it more than a match for any rock – or rock monster!* Features spinning saw blade, claw arm, moveable legs to walk or pose model and opening cockpit!* Includes miner and rock monster minifigures and accessories!* Combine with #8956 Stone Chopper to build the Cave Cutter!56 Stone Chopper to build the Cave Cutter! +
Theme
Power Miners +
Title
Mine Mech +
Txt1
Boulderax +
Txt2
Brains +
Type
Set +
USPrice
$7.99 +
Advertisement