Brickipedia
Register
Don't have an account?
Sign In
Advertisement
in: Class 2 articles, Sets listed for ages 7 - 14, 2009 sets,
and 4 more
English

8962 Crystal King is a Power Miners set released in 2009. It includes Rex and Duke (both version 2) Minifigures.

The Crystal King has grabbing claws and crystallized teeth. His body is glowing with crystals, caused by devouring many crystals in the past, and he can fit a whole Power Miner in his mouth. His jaw is hinged and has 3 places where it locks: closed, "roaring", and opened to the maximum (about 180 degrees from the closed position). The Crystal King has surprisingly small legs compared to the rest of his body. The drill Rex is holding can revolve. It is larger than the miner, and the drill blade is made from three pieces commonly used as BIONICLE claws, eyes, or teeth. All of his crystals are green (unlike the Clutch Powers movie).

The Crystal King is the largest of all known Rock Monsters. In the "Bios" section of the Power Miners page on LEGO.com, the Crystal King is said to be the "undisputed ruler of the Sulfurix," likely because he shares the same colours as a Sulfurix monster. This is odd, since in the actual set description he is said to be the king of all Rock Monsters.

The Power Miners "encountered" him while mining, apparently awakening him from a very long sleep. The Crystal King is the most powerful Rock Monster, and has eaten crystals for ages. The older he gets, the more power he gains. His body is glowing with the crystals he has devoured over thousands of years. According to a comic, the Crystal King was awakened by the noise of the Titanium Command Rig's drill. Enraged, he smashes many of the Power Miners' vehicles until the Titanium Command Rig arrives. He was so powerful that he was able to lift the Titanium Command Rig off the ground during a battle. The Power Miners were able to defeat him by transforming the rig into its tower mode, knocking him off-balance. This caused the rig to fall on top of him, smashing through the cavern floor. The Crystal King apparently survived; he was seen dangling from a rock ledge in the background. 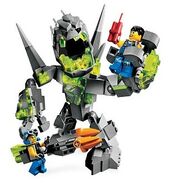 The King's teeth and claws. 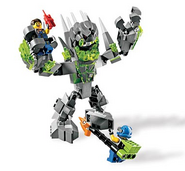 $29.99 +
Released
May 30, 2009 (US) / August 3, 2009 (UK) +
ShopDescription
'Beware the wrath of the Crystal King! … Beware the wrath of the Crystal King!<br />The Crystal King, king of the rock monsters, has awakened – and he’s not happy! With his spiky stone armor, crushing grip and mysterious crystal energy powers, the Crystal King is the most powerful foe the Power Miners have ever faced. Will a power drill and their wits be enough to save the day?* 1 engineer and 1 Power Miner minifigure included!* Crystal King features spiky armor, moveable arm and legs, and opening jaws and hands!* Accessories include dynamite, spinning drill tool and yellow crystals!* Crystal King measures 6½ inches (16.5cm) tall!tal King measures 6½ inches (16.5cm) tall! +  and Thousands of years old and glowing with th … Thousands of years old and glowing with the energy of all the crystals he's devoured over the centuries, Crystal King is the ultimate, undisputed ruler of the Sulfurix. His size and strength are unrivaled by any known rock monster, and he just keeps getting bigger and stronger as he gets older.ting bigger and stronger as he gets older. +
Theme
Power Miners +
Title
Crystal King +
Txt1
Rex +
Txt2
Duke +
Type
Set +
USPrice
$19.99 +
Advertisement