Brickipedia
Register
Don't have an account?
Sign In
Advertisement
in: Class 2 articles, Sets listed for ages 8 - 14, 2009 sets,
and 3 more
English

In its stationary mode, the drill could be turned by means of a wheel on one side. The holding clamp for the rock monster capture cage is exposed in this configuration, between the wheels. When the Rig needs to relocate, the drill lowers to rest along the main frame, with the control room at the top turning on its hinges to remain upright in either configuration. The wheel that turns the drill now interlocks with a mechanism connected to the wheels, so that the drill will spin automatically as the Rig moves forward.

Other details include a crane for manipulating the capture cage, which can be raised and lowered; flick-fire dynamite shooters and a net cannon attached to the drill frame, which also reorient when the Rig changes configuration; a rope and hook on the rear; and a computerized analysis station opposite the holding clamp. The set comes with minifigures of Doc, Brains, and Duke, as well as Tremorox and Glaciator rock monsters.

The Rig in mobile mode 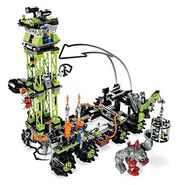 The Rig in stationary mode

The capture and analysis area