Brickipedia
Register
Don't have an account?
Sign In
Advertisement
in: Class 4 articles, Sets listed for ages 6-16, BIONICLE,
and 3 more

8973 Raanu is a 14 piece BIONICLE set released in January 2009. He is the Agori of the fire tribe. Raanu is a male character in the BIONICLE storyline.

Rannu is the Agori leader of Vulcanus. He appears in the 2009 film BIONICLE: The Legend Reborn, to be seen first in the Arena Magna in Vulcanus, standing alongside Metus and Mata Nui as fire tribe warrior Ackar fights ice tribe warrior Strakk. He is later seen in the Arena in Tesara and finally in the desert, where he tells the Glatorian that Kiina and Berix have been kidnapped. 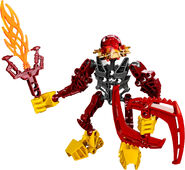 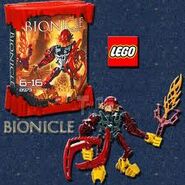 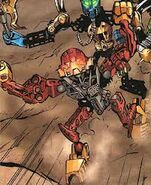 Raanu migh … Wise leader of Vulcanus!</br></br>Raanu might seem harsh, but this village leader has to be tough to help the people of Vulcanus survive in a dangerous world. Armed with a fire blade and shield, Raanu is smart enough to know what it takes to win in the arena.</br></br>* Fully articulated limbs allow you to pose your fire element Agori BIONICLE for work, battle or display!</br>* Send him into battle with his allied Glatorian #8979 Malum!</br>* Measures 5" (12cm) tall!an #8979 Malum!