Brickipedia
Register
Don't have an account?
Sign In
Advertisement
in: Class 3 articles, Sets listed for ages 6-16, BIONICLE,
and 3 more

8975 Berix is a 15 piece BIONICLE set released in January 2009. It contains Berix, a water Agori and scavenger.

The model is very similar to other Agori released in that year, with no particularly interesting deviations. The set comes with a medium blue version of Tahu's fire sword, and a double-sided shield.

Berix is an Agori from the village of Tajun. As an eccentric outsider, Berix is basically good-hearted. He's learned to survive by scavenging and making use of various bits of equipment he has salvaged. He's also stealthy, and able to figure out how various gadgets work together. Unfortunately, he's disliked by other villagers and Glatorians, who mistake his scavenging for thievery. He lived in Tajun village near the Skrall River. During one of his travels, Berix discovered a piece of parchment, which he identified as being a part of the Book of Certavus.

Later, Berix stayed hidden in Tajun during an attack by Bone Hunters and Skrall under Tuma, and was discovered by the Glatorians Ackar and Kiina and their new friend Mata Nui. After helping patch up a wounded Gresh, he accompanied the group to Gresh's village of Tesara, and was briefly mistaken by Kiina as a traitor before Metus was discovered to be the real villain. He later took part in the Battle of Roxtus alongside the Agori and Glatorian, before joining his friends in a quest to find a way for Mata Nui to return home. 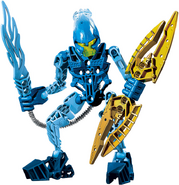 A member of … Scavenger of the sands!</br></br>A member of the water tribe, Berix is an expert at salvaging ruined equipment and patching it together. Equipped with a water sword and shield, he defends himself against any creatures that might be lurking in the sands.</br></br>* Fully articulated limbs allow you to pose your water element Agori BIONICLE for work, battle or display!</br>* Send him into battle with his allied Glatorian #8981 Tarix!</br>* Measures over 5" (12cm) tall!981 Tarix!