Brickipedia
Register
Don't have an account?
Sign In
Advertisement
in: Class 3 articles, Sets listed for ages 7-16, BIONICLE,
and 3 more

8978 Skrall is a 50 piece BIONICLE set released in January 2009 as part of the Glatorian subtheme. It is one of the savage members of the rock tribe of Bara Magna.

The set includes 50 pieces, mainly in Black and Red, which are used to build a 7" tall(17 cm) figure, which is armed with a Sword, a Thornax Launcher, and a Saw Shield.

The Skrall are evil beings, cruel and powerful; they have never lost a fight in the arena, and consider other beings to be below them. Their society has four classes: Leader (all but extinct); special forces; the smaller and weaker (usually unnamed) warrior class, known simply as Skrall; and the Sisters of the Skrall, the females of the race who have an antagonistic relationship with the males. The Skrall also are related to Rock Tribe Agori like Atakus, and distantly related to the Bone Hunters like Fero.

At one point the Skrall were ruled over by one of the Element Lords, who had been one of their leader class fused with the Element of Rock; they thus fought in the Core War to seize control of Energized Protodermis leaking from within the planet. However, the planet later shattered, leaving the Element Lords trapped and the war over. The Skrall did not take part in the new society established by the Glatorian and Agori, but were eventually attacked by the mysterious Baterra, shapeshifters who slaughtered all in their path. With the leader class eliminated except for Tuma, the Skrall legion made their way south, leaving the Sisters behind in the process. One Skrall warrior discovered that the Baterra were in fact machines, and for reporting this to Tuma was given the name Branar.

Determined to defeat the Baterra on their next encounter, Tuma sought to seize control of the Bara Magna desert, but began by testing the Glatorian and Agori to be certain he would not have to face a war on two fronts. Skrall warriors were thus sent to the arena to engage Glatorian fighters for resources, before launching a full scale attack on the village of Atero. The Skrall later joined forces with the Bone Hunters to begin attacking the Agori villages in force, only to be thwarted by the unexpected arrival of Mata Nui, whose empowerment of the Glatorian and rallying of them and their Agori villagers led to the defeat of the Skrall. 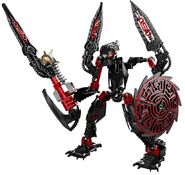 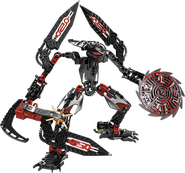 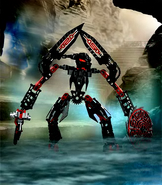 A member of … Most dangerous of all!</br></br>A member of the savage rock tribe from northern Bara Magna, Skrall has proven to be the toughest and most dangerous Glatorian of all. Armed with a spiky Thornax launcher and a rotating, saw blade shield, he lives for battle and fears nothing! Includes one Life Counter for the new BIONICLE battle game!</br></br>* Fully articulated limbs allow you to pose your Glatorian BIONICLE for work, battle or display!</br>* Battles will be won with his arsenal of 3 blades with Skrall tribal design, spinning shield, and functional Thornax launcher!</br>* Member of the Rock Tribe allied with #8972 Atakus!</br>* Includes life counter for action figure game!</br>* Measures over 7" (17cm) tall!gure game!