897 Launcher is a Classic Space set released in 1978. It contains a transporter erector launcher, consisting of a tractor unit and a trailer that carries a rocket. Also included are two Classic Space astronauts (red and white).

This set was not available in the US, where the identical set 462 Rocket Launcher was sold instead.

The tractor unit has a rotatable platform with a dish antenna and a control monitor, mounted on its back on a 2x2 turntable. On the trailer is also a small satellite/probe that can be attached to the tip of the rocket. 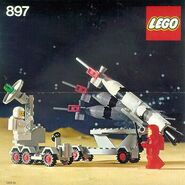