"Surrender, and I will let you live!"
―Skrall
"If I surrender, I will have nothing to live for."
―Gresh

8980 Gresh is a 55 piece BIONICLE set released in January 2009. It contains Gresh in his original armour, who is a Glatorian.

Easily tempered, Gresh always fights his way out of trouble rather than talk himself out, but with his level of power he can afford to. Even with a high level of power he always got himself into dangerous situations but always somehow "accidentally" got himself out of them. Though reckless, Gresh was very good at making decisions during dangerous situations. Even though he was not as wise as other Glatorian, Gresh was clever enough to get himself out of a too risky situation and retreat when necessary.

BIONICLE.com Description
An experienced Glatorian for the jungle tribe, Gresh combines incredible speed and agility with surprising strength in the arena. His favorite move is to back flip away from a blow and fire his spiky Thornax launcher while in mid-air. A tough opponent in any fight! Includes one Life Counter.

Bio
Gresh is an experienced Glatorian warrior trainer, but is relatively young in comparison to others. He makes up for his youth by showing a lot of guts and power in his fighting skills. He brings a practical and strategic approach to battle. Gresh has an encyclopedic knowledge of combat maneuvers and the ability to teach them to others. But sometimes he relies too much on the tried and true, rather than try new and innovative tactics.

Quote: “I’m stronger and faster than an Agori. I know how to fight. Doesn’t that mean I have to protect people who aren’t as strong as I am?” 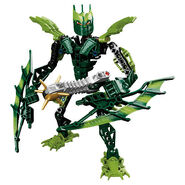 An experienced … Master of the arena!</br></br>An experienced Glatorian for the jungle tribe, Gresh combines incredible speed and agility with surprising strength. His favorite move is to back flip away from a blow and fire his spiked Thornax launcher in mid-air. A tough foe in any fight! Includes one Life Counter for the new BIONICLE battle game!</br></br>* Fully articulated limbs allow you to pose your Glatorian BIONICLE for work, battle or display!</br>* Ready for attack or defense his vine mask, double bladed shield and functional Thornax launcher serve him well!</br>* Member of the Jungle Tribe allied with #8974 Tarduk!</br>* Includes life counter for action figure game!</br>* Measures 7" (17cm) tall!on figure game!