"The secret to being a winner is already knowing the mistakes losers make … and not making them yourself."
―Tarix

One of the founders of the Glatorian system on Bara Magna, Tarix has great respect for the traditions that have been created over the millennia. When he speaks, Agori and other Glatorian listen. While not as flashy a fighter as some, Tarix relies on tried and true moves, raw courage, and a refusal to surrender to carry him through. On the other hand, he's convinced he's seen it all and can sometimes be taken by surprise. 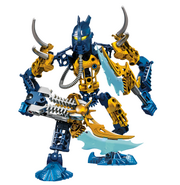 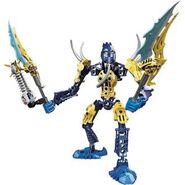 Tarix from another angle