Strakk was a glatorian fighter for the ice tribe in Iconox Village. He, along with Gresh and Tarix saved Berix from a Bone Hunter in the Glatorian comic issue one. Strakk also fought a pack of Vorox led by Malum in the same issue.

Two issues later, not too long after the arrival of Mata Nui, Strakk later fought Ackar in an arena match, but lost and conceded. Strakk, not wanting to lose, got up and picked up his Ice Axe and hurled it at Ackar, stunning him and knocking him down. Before Strakk could deliver the final blow Mata Nui jumped in to save Ackar. Mata Nui was about to lose to Strakk when Strakk's Ice Axe touched Mata Nui's helmet. A beam of light came out of the helmet and knocked Strakk over. Mata Nui then made Strakk concede loud enough for everyone to hear. Later that night Mata Nui tells Ackar that Strakk was banished for attacking after he surrendered. 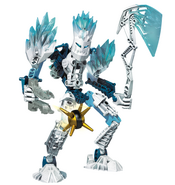 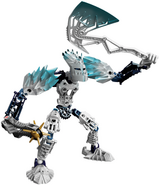 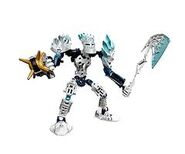 Ruthless and amb … A treacherous foe!</br></br>Ruthless and ambitious, Strakk will do whatever he must to be named champion of all Glatorian. His ice axe and spiked Thornax launcher make him a dangerous opponent to turn your back on! Includes one Life Counter for the new BIONICLE battle game! </br></br>* Fully articulated limbs allow you to pose your Glatorian Bionicle for work, battle or display!</br>* This icy cold villain is armed with spiky-icicle shoulders and mask, translucent ice axe and functional Thornax launcher!</br>* Member of the Ice Tribe allied with #8976 Metus!</br>* Includes life counter for action figure game!</br>* Measures over 7" (17 cm) tall!ure game!