Vorox is the name of the species; The picture above is a particular Vorox. The Vorox have a stinger tail and a sword. Their feet are clawed, with 3 "toes" on each. After "the accident", they have become little more than beasts.

The Vorox are the warriors of the Sand Tribe of Bara Manga, and were once ruled over by the Element Lord of Sand. Savage beings with stinger tails and claws, they were feared by all both before and after the Shattering that broke the plant into three pieces. Between the harsh conditions of their new environment and the treatment they received at the hands of the other Agori and Glatorian, the Vorox of Bara Magna regressed to become bestial beings who, though they still maintained a social order among themselves, attacked the other inhabitants of their world without mercy. The Vorox of Bota Magna, including the mighty warrior Kabrua, did not suffer these changes and-due to an alliance with Velika, possessed highly advanced weaponry developed by the Great Beings.

The Vorox didn't become involved in Bara Magna society, and served mostly to menace various beings; they were later joined by the Fire Glatorian Malum after his exile from Vulcanus. Securing leadership of a pack of them through defeating their alpha male, he would later lead them against various foes, including the Bone Hunters. 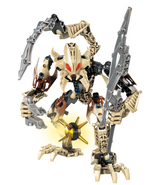 A Vorox in front of some stairs

A Vorox as seen in BIONICLE: The Legend Reborn